Rooting has a learning curve | Rooting Kameko by Tasha Edenholm

Let me just say, rooting is my Everest. I’ve said it before, and I suspect I’ll be saying it for a long, long time to come (because I intend on mastering it & at this point, well, it’s downright disheartening).

I have just learned that all felting needles are not made equal. And I suspect the same goes for the rooting tools. I’m using one I got off ebay (that was selling kits at the time). I don’t know what it is. Probably a mushroom. The needle was a 36. But it had almost no barbs. It wasn’t forked, I know that.

Pre-rooting, I heard a lot of “You’ll break a lot of needles initially.”  But I didn’t. I felt awesome. Look at me, and I’m not even breaking any needles.  Well, that’s because 36 gauge suck! And my needle was so good it pierced my finger. Straight through. Could have threaded an earring in that suckah. And it was either no collecting hair (and thus I’d have to shove it under a stack of mohair & hope for the best) or too many hairs, & then pull out ALL the extra hairs. Rooting Carson was an adventure in tediousness and pain. Tedious because I just wasn’t catching hairs. And pain because I just started jousting with that felting needle and well, lost respect for the power of said needle. (Hello, finger earrings anyone?) I’m coming out here and admitting this because I loved his face. But in the end, I hated his hair. I actually think now my hair hatred has a lot more to do with my own perfectionism, that bloody needle, and potentially a little bit of the colour of the mohair I used. Because I’m now rooting with dark brown on ‘Kameko’ and I just loooove it! Of course, I could also owe this new found love affair to the needle.

The needle. . . honestly, that 36 sucked. Big time. I couldn’t catch hair. And I was doing it mostly blind. I didn’t break any needles, sure, but at what cost?  I started google researching felting needles. And on a whim ordered one up. 38! These have arrived FINALLY on Thursday. I actually have since ordered 42’s too, but the postal service appears to like to put me into rooting limbo, so I still am waiting on those! But the 38’s? OMFG! They caught maybe too much hair (at least for the first three sticks, then I varied my hair separating system). I was over the moon in looove with these needles! Like ready to rush onto here and pen this entire post, in love with these needles!

Fast forward to Thursday night, and five quickly broken rooting needles, and I was again despairing. I was in the groove of rooting and went back to my 36’s thinking maybe now that I was ‘skilled’ at this stuff, I would have a different outcome. Yeah, nada. I put the rooting tool down and waited for my 42’s. And then hoped to god that I didn’t break all of those (hello, 42’s – infinitely smaller than 38’s! And I broke ones that were only 2 deviations apart, was I going to blow on these suckahs and have them snap on me?! NOooooo!)

Well, between penning this they showed up Friday. Huzzah! & I broke them out. And OMG!!! They have like 3 barbs, maybe 6. But they catch hair easily. And they ONLY root one hair per follicle. I’ve had more than 1 once! And, thus far, I’ve only broke one! ONE!!!!!! That means I still have 4 needles left (and yes, I went ahead and ordered more because I can’t run out again, and I have a feeling the postal service is going to hurt me for a while, until reborners start opening shops in Canada!) But OMG, I loooove this 42. I think also that my 36’s were cut too short and that could be why it wasn’t rooting half the time too, because both the 42’s and 38’s are longer. The 38’s were a bit longer than these 42’s, which also might be why they snapped more too! I dunno. I’m a novice. And, like I said, rooting has a learning curve! A big dang one at that!

But swoon! 42 needles! Anything that turns this from the nightmarish first experience into a pleasant one, is worthy of swooning over! “Kameko” has the most brilliant hair now. He’s got maybe 1/6th of his head rooted already and I just adore him. I love his face. But I love his hair even more! I moved away from rooting Aubrey because of the hair colour. I’ll return to her, of course, but I really wanted to try out the darker mohair. 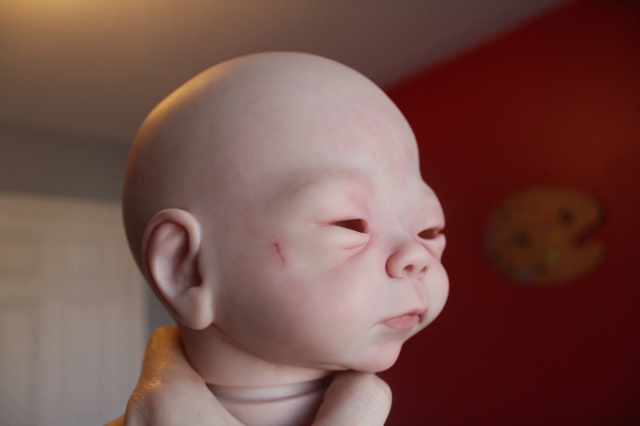 Eyebrows! I briefly (only briefly) thought he suited bald. I was, of course, wrong!

With the start of hair (at the end of Friday).

I can’t wait to post most recent pics of him when his hair line is even more filled in. But gosh, I should be reaching the summit of Everest any day with my 42’s (exaggeration, probably! But I’m swooning, yall!)

I only wish I’d gone to the effort of researching or reading forums thoroughly BEFORE! All rooting needles are truly not made equal. And I suspect the same goes for rooting tools. I can’t wait to invest in something a bit better! I have my eye on a few others. And one day, maybe, I’ll try my hand at a german forking tool too! LOL!