Posted on January 6, 2014 by Shaylen Maxwell

I mentioned a fellow reborner. The artist behind Donna’s Dollies! And I promised a full & proper update. So here it is. And, actually, it all started BECAUSE of my shoulder woes & my panic thinking I might never be able to root heads.

I was on kijiji, posting up my usual listings for available babies (to hedge my selling bets) when I came across a listing for one of her rooted babies. The rooting was incredible!! I loved the swirl, the rooting. Truly beautiful!

Her Freya. Isn’t the swirl amazing?!

I immediately sent her a msg to tell her her rooting was AMAZING!

When I first started out, I was shocked by how sweet the reborn community was. Perhaps it’s because the market is so good, and the creativity behind the evolving techniques reborning, I didn’t feel the same competition and nastiness and cut throated-ness that I did selling pop art. On Etsy (& my very brief stint on ebay), I regularly got msgs about my dolls by fellow artists complimenting my work, or asking for tips or tricks. Everyone was just so friendly. These comments boosted my confidence, so so much, esp on Ebay where almost no one was seeing my listings & I was sure I sucked ass at painting babies.  Anyway, I appreciated kind words so much that I had to send her some – tell her just how much I loved her rooted heads! And — as I’d seen it offered on a few reborn forums, but had no idea how I could ever go about that (should I need to) as I’m Canadian and additional shipping & duties wasn’t something I wanted to bank on either — I thought I’d also inquire about whether she’d ever consider rooting for hire.

I actually thought, for sure, she’d not reply back. But when she did, she told me she’d love to trade and have me paint hair for her(!!!) I was stunned. And totally banked it away as a future thought, we could trade heads. She was, after all, just a town away. And then time got away from me… The custom orders got crazy before Xmas. And I finally managed to root without my shoulder locking up &amp and it slipped my mind to contact her again. Until last week – well, now several weeks ago. She was reborning a Julien Marx and needed combi hair done. I, of course, said HELL YES. Cuz I loooove combi! And I was dying to see a Julien in the flesh. And so she drove him over. 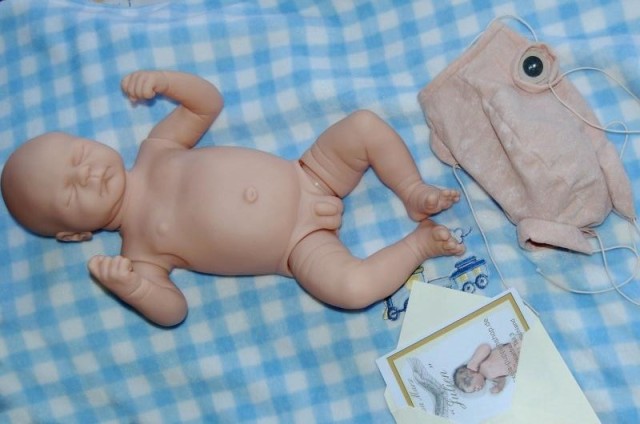 Julien by Elisa Marx – I have no acquired my own to reborn! I was smitten with him in person!

And ZOMG I made the worst first impression ever! I literally looked like I just fell out of bed (cuz I had) & the house was in chaos. She brought her son with her (only a few months older than Sneaky) & I learned her youngest girl was just 4 days younger than Meekly! We totally doll-geeked out. Her Julien was incredible! The layers of colour. The way she did her undertones. HER VEINING! She’s like the Da Vinci of veining. Her techniques were completely different, and I totally studied that head like crazy while it was with me. It was so awesome to see another reborn in person – let alone meet someone doing the same thing I was, having gotten into it in much of the same way (looking for a realistic doll for her daughter)! I took her up past piles of laundry and garbage bags, and hairballs on the stairs the size of small rodents. Apologizing profusely. I hoped she didn’t mind, and I suspect she didn’t – or graciously never showed it! LOL!! And she took a look at the doll heads I had ongoing in the office. Her son played with mine (well, I think Sneaky bossed him around a little too much; and had a tantrum when he touched his boat! Toddler woes). 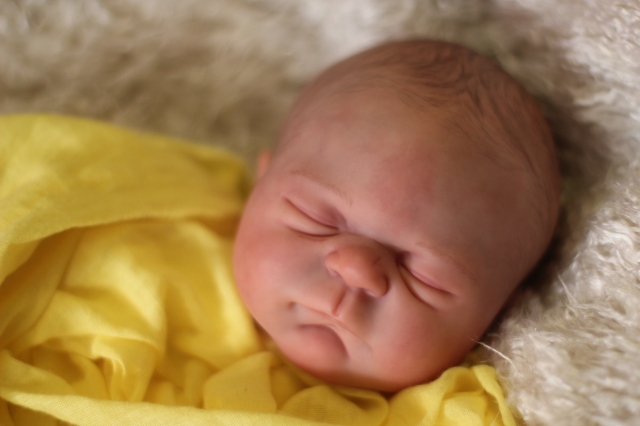 Her Julien. Before I added his rooted hair. Isn’t the layering amazing?

But OMG. So awesome! We traded tips. She was selling through Kijiji and Youtube, and I was doing FB & Etsy, and both of us loathed Ebay (what’s up with that?) We both hate rooting. LOL! I totally felt bad for wanting to have her root for hire! LOL! And I promised her I was going to teach her to paint hair (which, I totally am). We talked sculpts. And prototype babies. And kids. And, in the weeks since, the kiddos, spouses, and our respective zoos. She even worked at a pet store & had ferrets & a kinkajou. This is like OMGWOAHZ. Flashback 2004 when Beldoe & I met our first kinkajou at Petsmart, exotic pet of one of the women who worked there & were just in LOVE with one and needed to have one too! Both were pets Beldoe and I never got around to having (when we filled the zoo to 10 way back when. Well, that and a fennec and a baby goat! LOL!) and she and I both think walking ferrets on leashes are cool! (Except, she tells me it really isn’t as awesome as you think! ;)) What are the odds right?! 😀

Combi Julien, all ready to reunite with his lower half! LOL!

Oh and for Christmas, I got the honour of painting Roberto Sullivan’s head for her oldest daughter! How amazing is that? We traded some painted heads for an Ellis Kewy (she had three). & we regularly compare notes on the sculpts we’ve just gotten or what we’ll reborn next. And while Roberto was here with me (headless) Meekly played with his corpse while I painted hair. Which was also so cool. 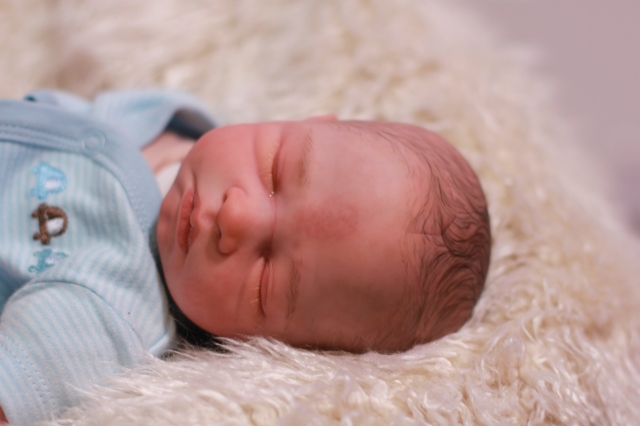 Roberto Sullivan, her daughter’s Xmas gift. (So honoured to have been part of the making of it! <3)

Super excited to have gained not only a friend in the industry, and a new friend! 🙂 & also, her friend Melissa knits the most amazing hats (for reborns too). Super affordable! Check out her page too! She can knit anything (& I’m taking her up on the offer to knit hats for all my preemie babies desperately in need of head gear!)