This was a big one. Figuring out my marketplace.  And whilst I do love ebay for purchasing, I’m not especially a big fan of selling through them. I’ve done, hum, four auctions now. Sam I sold locally, after having him up there twice; Meg sold to a 12 year old girl who never paid me (I took Beldoe’s advice and deleted the part about having to contact me if you have a feedback score of less than 5). I tracked her down via Facebook and then opened a case with Ebay and I’m still waiting on that.  The hardest part of it was feeling as though I’d finally broken the market there, only to have the rug pulled out from under my feet. And then I listed Sam II & crickets again. :p

Perhaps in future it will be a place I list again. But the actual sheer volume of work I was putting into designing the templates and pics doesn’t actually make sense for the return. Which is why I went back to the tried and true Etsy. Sure, I have to list for a set price. But I was going to do that anyway! 😀 And the returns for the maker are higher. Market is smaller. BUT I’ve done it all before. It’s where I run my custom portrait shop. And I’ve got a custom formula I’ve honed through them, that I can replicate with my reborns.

And the best part? Every three months it basically runs itself. No scrambling for auctions and timing them just right (I’m terrible at that – being someone who is still up at 3AM working!) No watching the auctions end or constantly checking in. And what’s with ebay not sending email alerts when people bid.  And I can NEVER find my dolls. The tags suck. Etsy is much more my terrain. And I’m so happy to have finally — definitively — made this decision.

That being said, Alice Pearl (Sofie by Denise Pratt) is up there! As are Sam II and Cozy (my beloved combi baby! Still obsessed with her hair! LOL!) I just finished the last of Alice’s photoshoot so will be adding the pics to her album and here momentarily. And once Meg is officially removed from ebay, I’ll be adding her up there too! & putting up some shop icons on here for ease of use, if any followers are watching this blog! Haha. XD

Oh & check out these before & afters of Kameko (a few follicles away from finishing this boy) and Sofie. 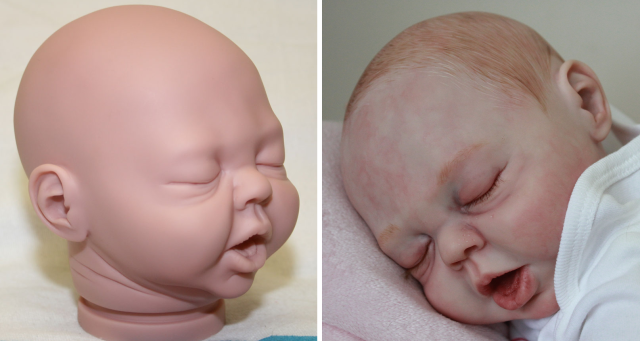